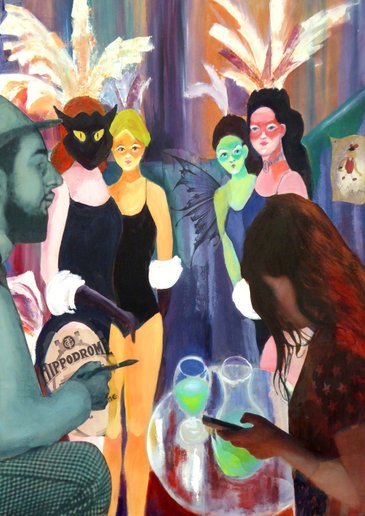 This is a collage along with an assemblage to represent World

It is part of the family history series and is a tribute to my parents who were both in the RAF during the war and contains wartime newpaper cuttings, letters to my parents and images of them and family members, some of who died in the war.

It is also an exploration into the words 'There'll be Bluebirds over the White Cliffs of Dover'.  How could this be the case, when there are no bluebirds in Britain?

I found the answer to this, eventually!

Some suggested it meant swallows, as their wings have a bluey sheen.

Others thought it was the RAF pilots in their blue uniforms.

I eventually found out that it was neither.  The songwriter was American and he simply did not know there were no bluebirds in Britain'

This painting involves three time periods.  The main picture is in oil and depicts showgirls at the Birmingham Hippodrome in 1926, where my Aunty Lucy was a dancer.

I then devised a method of producing collage which included some of the original oil background to produce the other two figures of Toulouse Lautrec in 1899 and the young girl absorbed by her mobile in 2018.  She does not notice the showgirls at all.  Toulouse Lautrec however is very interested in the girls and is painting them.

this type of collage was also used to produce the fairy wings and the tattoo on the dancer's leg.

The small table has a bottle of absinthe upon it.  The green showgirl is in fact 'La Fee Verte' or the Green Fairy, who is said to appear when too much absinthe has been drunk.